X-ray is an important diagnostic tool for today’s veterinarian. X-rays are commonly used to identify the area and extent of a bone break, to determine the stage of pregnancy (and number of pups), to identify potential abdominal problems and obstructions, to find and identify tumors. We are at Ark Veterinay Hospital take films for the BVA & Hip and Elbow scoring schemes.

A single radiographic session is not hazardous for the dog. We at Ark Veterinary Hospital sedate all patients to ensure a good quality safe imaging can take place.

Using a special ruler, the area of concern is measured in order to determine the thickness, and thus the length of exposure necessary to produce a good quality image. The dog is then positioned on the x-ray table in order to get an optimal view of the dog’s broken bone (or other area of concern).

A plastic cassette containing the film is placed under the target area. The cassette prevents scratches or impurities from getting on the film and distorting the image produced. Veterinarians use different cassette sizes depending upon the size and shape of the affected area. The x-ray equipment is on a mechanical “arm” and is positioned over the area. The ray is triggered, creating images on the film in varying shades of gray based upon tissue density.

Repositioning the dog and taking additional film allows the veterinary staff to get multiple views. Multiple pictures reveal images of a break, tumor, or other health issue not visible in one image, but clear and distinct in another. The veterinarian reviews the films to diagnose the problem, and create a recommendation for treatment. 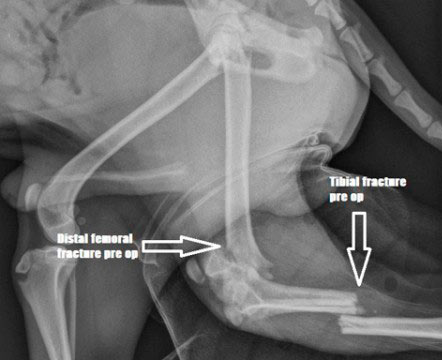 Back to Veterinary Services

This website uses cookies to improve your experience while you navigate through the website. Out of these cookies, the cookies that are categorized as necessary are stored on your browser as they are essential for the working of basic functionalities of the website. We also use third-party cookies that help us analyze and understand how you use this website. These cookies will be stored in your browser only with your consent. You also have the option to opt-out of these cookies. But opting out of some of these cookies may have an effect on your browsing experience.
Necessary Always Enabled
Necessary cookies are absolutely essential for the website to function properly. This category only includes cookies that ensures basic functionalities and security features of the website. These cookies do not store any personal information.
Non-necessary
Any cookies that may not be particularly necessary for the website to function and is used specifically to collect user personal data via analytics, ads, other embedded contents are termed as non-necessary cookies. It is mandatory to procure user consent prior to running these cookies on your website.
SAVE & ACCEPT